ENNIS, Texas – Frankie “The Madman” Taylor earned one of the strangest Pro Extreme victories in American Drag Racing League history at Texas Motorplex Saturday night. In the ADRL season opener, Taylor made four uncontested passes down the track to take the win at Dragpalooza. The race was the first sporting event in the state to entertain spectators since the COVID-19 quarantine was enacted in mid-March.

Taylor’s E1 opponent, Michael Neal, fouled out by .005 seconds. In the second round, Taylor was to race Jeffrey Cummins, but Cummins was unable due to being involved in a scary crash in the round before with Randy Merick. Round 3 was potentially the match of the weekend, with Taylor facing top qualifier Wesley Jones. Unfortunately, a parts failure prevented Jones from making it to the line. Finally, in the championship round, the Texan was to face Jason Hamstra, but Hamstra’s ’69 Camaro was on the wrong end of an event-ending issue during his semi-finals win over Adam Flamholc.

“I’d rather be lucky than good,” Taylor said in the Winner’s Circle, smiling. “We got lucky in the final, we couldn’t have beat him anyway because we broker either the driveshaft or the rear end or both. We tore something up. We just had a real good weekend.

The event was paused more than 90 minutes during E1 when Merick’s ’79 Corvette took a hard-right turn at the finish line, going airborne, and hitting Cummins’ ’19 Mustang, causing severe damage to both machines. Fortunately, both racers walked away from the scary incident, thanks to the superbly-constructed racecars produced by master chassis builder Larry Jeffers.

“That’s the hardest part of what we do,” said ADRL President Mel Roth. “You hate to see that happen to anyone, but thankfully they are both OK and the only damage was to their racecars. Cars can be replaced; racers can’t.”

Jones earned top qualifier honors with a pass of 3.667 seconds at 211.36 mph Friday night in his stunning Batman-themed ’41 Willys. The run not only put him at the head of the field, but also put $1,000 in his pocket thanks to former ADRL national event winner and native Texan Thomas Meyers and Meyers Automotive. Jones also earned a bounty of $500 and two cases of cold beer Thursday night courtesy of Motorplex General Manager Andy Carter and ADRL CEO Kenny Nowling for being the first car to run in the 3.60s during testing. 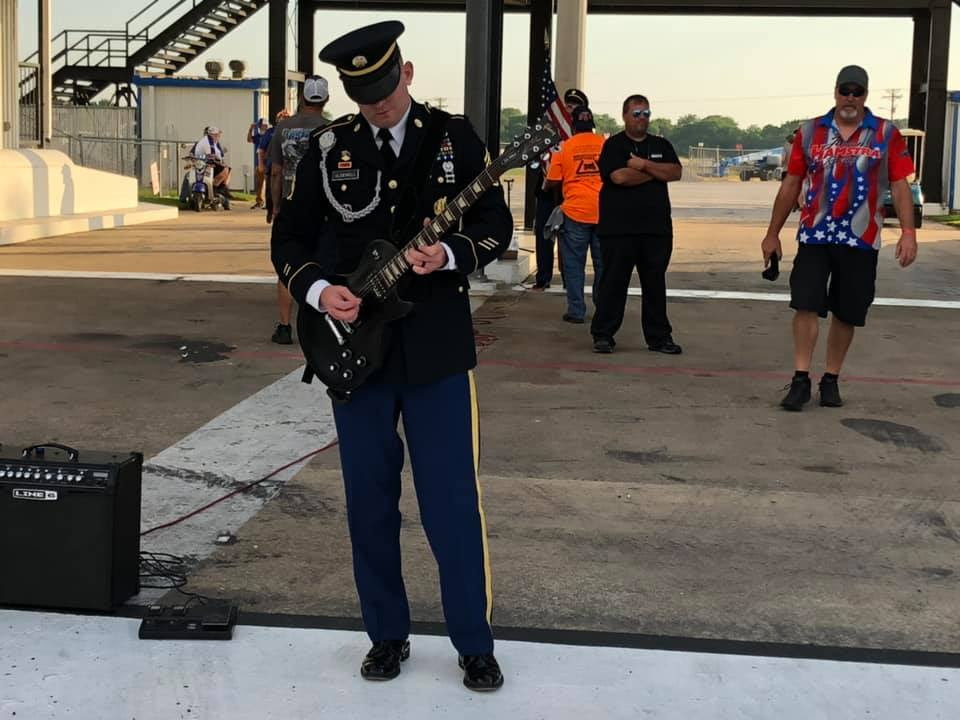 (Army SFC Sam Glidewell provided a blistering performance of the National Anthem on his Gibson Les Paul Saturday evening at Dragpalooza. ADRL Photo)
After the event, as is tradition, fans mingled with drivers at the post-race party held near the starting line, many of them leaving the track not only with great memories, but with $100 bills and free ADRL merchandise to boot.

The next event on the ADRL schedule is the ADRL Gateway Drags July 10-11 at World Wide Technology Raceway outside of St. Louis. As always, ADRL tickets are FREE and can be found at a number of area businesses and can be printed at home by visiting ADRLDrags.com.

Get the Gear! Missed out on Dragpalooza? Need your ADRL merch? Get everything you need by clicking HERE!

For more information on the American Drag Racing League and to stay up-to-date on breaking news, follow them on their official page on Facebook at Facebook.com/ADRLDrags and on Instagram and Twitter at @ADRLDrags. Fans can also visit the official ADRL website at ADRLDrags.com.